“The LoRa Alliance continues to drive a strategy of making LoRaWAN widely accessible and easy to use,” said Donna Moore, CEO and Chairwoman of the LoRa Alliance. “As of the end of 2020, we have public and private LoRaWAN networks active in more than 160 countries around the world. We also know that true global coverage is most quickly accomplished by interconnecting networks and allowing devices to seamlessly move between them – especially for logistics and tracking applications. Many of the largest global brands have supported this approach by implementing LoRaWAN roaming across their networks, making LoRaWAN more accessible than ever before.”

Recent updates to the TS002-1.1.0 LoRaWAN Backend Interfaces Technical Specification completed in Q4 2020 enhance ease-of-use for roaming implementations and add support of LoRaWAN geolocation features for roaming devices. LoRaWAN roaming covers both mobile assets and fixed ones of multi-national customers whose devices leverage the radio coverage from roaming partners across multiple countries. In addition to public-to-public network peering, LoRaWAN’s roaming capabilities also support public-to-private and private-to-private network peering. The LoRaWAN protocol also offers a very unique feature, whereby a given device could be served simultaneously by several gateways that may belong to the home and one or more visited networks. From a functionality perspective, this allows several networks’ gateways to act as one, with unified coverage serving the device.

To further support roaming, the LoRa Alliance has launched the Connect EU initiative to accelerate roaming across Europe, with participation from other regions. The initiative supports and encourages collaboration among all LoRa Alliance members who are interested in leveraging LoRaWAN roaming. This effort, along with the LoRaWAN Backend Specification enhancements, shows the alliance's commitment to the continuous improvement of this capability and ensures active member engagement in roaming networks and hubs.

LoRaWAN roaming capability is presently available from the following LoRa Alliance Members in these countries:

In addition to being able to access LoRaWAN roaming via agreements with network operators, multiple LoRa Alliance members have launched roaming hubs that can mutualize multi-network interconnections. The hubs make it easier for network providers to connect to multiple vendors at one time. Finally, roaming is already accessible via satellite network provider Lacuna Space allowing for integrated terrestrial and satellite networks, providing coverage to remote areas.

To learn more about LoRaWAN, the LoRa Alliance, the benefits of membership, and to keep up with the alliance’s latest developments, please follow us on LinkedIn or Twitter or visit our website.

About the LoRa Alliance:

The LoRa Alliance® is an open, nonprofit association that has become one of the largest and fastest-growing alliances in the technology sector since its inception in 2015. Its members collaborate closely and share expertise to develop and promote the LoRaWAN® standard, which is the de facto global standard for secure, carrier-grade IoT LPWAN connectivity. LoRaWAN has the technical flexibility to address a broad range of IoT applications, both static and mobile, and a robust LoRaWAN Certification program to guarantee that devices perform as specified. Deployed by 150 major mobile network operators globally, LoRaWAN connectivity is available in more than 160 countries, with continual expansion. More information: https://lora-alliance.org/

LoRa Alliance® and LoRaWAN® are registered trademarks, used with permission. 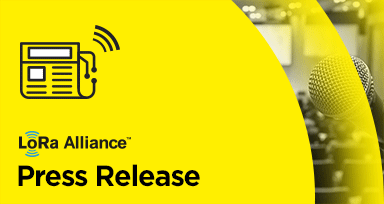 Event will Remain at the Palais des Congrès, Paris  Fremont, California – April 09, 2020 – The LoRa Alliance®, the global association of companies backing the open LoRaWAN® standard for the […]

Fremont, Calif. – May 2, 2019 – The LoRa Alliance™, the global association of companies backing the open LoRaWAN® protocol for the Internet of Things (IoT) low-power wide-area networks (LPWANs), […]